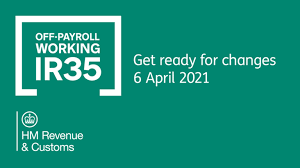 The off-payroll working rules can apply if a worker (sometimes known as a contractor) provides their services through their own limited company or another type of intermediary to the client.

An intermediary will usually be the worker’s own personal service company, but could also be any of the following:

The rules make sure that workers, who would have been an employee if they were providing their services directly to the client, pay broadly the same Income Tax and National Insurance contributions as employees. These rules are sometimes known as ‘IR35’.

The client is the organisation who is or will be receiving the services of a contractor. They may also be known as the engager, hirer or end client.

Public authorities became responsible for deciding if the rules applied where they contracted workers who provide services through their own intermediary.

All public authorities and medium and large-sized clients outside the public sector are responsible for deciding if the rules apply.

If a worker provides services to a small client outside the public sector, the worker’s intermediary is responsible for deciding the worker’s employment status and if the rules apply.

We’ll also explain the off-payroll working rules (IR35 reform) and the impact this has on contractors providing their services to public sector bodies, and medium-large private sector businesses.

IR35 is a piece of UK tax legislation.

It’s designed to close a loophole in the tax system where workers could use the setup of a limited company structure in order to pay less tax.

Where, despite a contract being with a limited company, the reality is more like an employer-employee relationship, the worker should be taxed as an employee. This is referred to as a ‘deemed employee’.

To be seen or judged in a specified manner.

The IR35 legislation looks to identify ‘deemed employees’ and ensure they are taxed correctly, however IR35 can impact those operating genuinely through a limited company structure due to the subjective nature of the legislation.

It impacts UK personal service companies (PSCs) – a term which has not been clearly defined by HMRC but, broadly speaking, refers to limited companies with a sole or majority director/shareholder who provides the services of the company.

A limited company is a type of commercial business where the company and its owner are considered legally separate, and so the owner is only liable for debts up to the amount they invested into the company.

Why was IR35 introduced?

The government thought contractors were exploiting the tax system by leaving employment roles to create limited companies and return to the same role in a contracted relationship, therefore benefitting from the tax advantages of a company setup. Namely, contractors using a limited company can take the majority of their earnings in the form of dividends, which is taxed at a lower rate than income tax.

Exploiting the tax system in this manner is considered a form of tax avoidance which HMRC defines as “bending the rules of the tax system to gain a tax advantage that Parliament never intended.”

The then Chancellor of the Exchequer, Gordon Brown, enforced the IR35 legislation in 2000.

Since then, contractors judged to be employees (‘deemed employees’) have had to pay tax at the equivalent rate to employees, which is likely more than they’d have had to pay if they were deemed limited companies.

While ‘deemed employees’ must pay the equivalent level of tax as typical employees, they do not get access to any of the benefits typical employees enjoy, such as sick pay, holiday entitlement, or company pensions. Many critics of IR35 describe this as unfair.

Why does IR35 compliance matter?

If HMRC finds that you have been working on a self-employed basis, described as ‘outside IR35’, when, in actual fact, the service you provide your client reflects that of employment, described as ‘inside IR35’, you’ll be required to pay the missing tax back to HMRC, plus interest and any penalties.

Given HMRC can investigate as far back as six years, being found non-compliant can have huge financial consequences.

However, as of 6th April 2021, this only applies to those contracted to a small private sector client. Under the off-payroll working rules (a reform made to the application of the IR35 legislation), the liability for compliance will sit with another party in the contractual chain such as the client or recruitment agency where applicable.

What does ‘outside IR35’ mean?

If your contract is deemed outside IR35, you are considered self-employed for tax purposes and are free to pay yourself in the most tax efficient way, which is typically through a mixture of salary and dividends taken from your company.

Contractors working outside the scope of IR35 are responsible for making sure all their personal and company taxes are calculated correctly and paid on time.

If your contract is deemed inside IR35, you’re considered an employee for tax reasons. This means you’re effectively required to pay tax at the same rate as an employee in the same tax bracket.

Tax and employment legislation are currently separate. So, whilst you may be considered an employee for tax purposes, you are not automatically entitled to employment rights.

What are the implications of working inside IR35?

When working inside IR35, you’ll need to pay National Insurance Contributions (NICs) and Income Tax on your earnings.

For those engaged by a small private sector client, this is paid via a ‘deemed payment’ which is the payment you will be required to make to HMRC at the end of the tax year, taking into account the extra tax you must pay as a result of working inside IR35.

Like many things related to IR35, calculating the ‘deemed payment’ is fairly complex. That’s why, in many cases, contractors seek professional help in doing so.

Contractors working inside IR35 in the public sector, and those working inside the rules for medium and large companies in the private sector from 6th April 2021 onwards, do not need to work this out. Your fee-payer will do this on your behalf and deduct the NICs and Income Tax from your invoice before paying you.

More commonly however, the fee-payer will prefer an alternative working arrangement such as use of an umbrella company.

An umbrella company enables contractors to have the flexibility and independence of contract work, but with employment under the umbrella company. This, in turn, solves complex payroll and administration issues for fee-payers.

All of our advisers are qualified member of the following professional bodies.